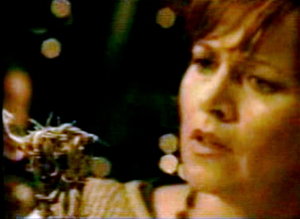 This is the opening challenge in a Direct-To-Consumer (DTC) television commercial for Nexium, first aired in 2004. The aim of the commercial is to connect directly with the experience of heartburn sufferers so that they see themselves in the persons in the ads whom we are then told suffer from acid reflux disease, a disease that appears identical with heartburn.

it’s different for people with acid reflux disease, because you know the heartburn’s gonna nail you.

The image of food turning into barbed wire is both a lived anticipation and a reality we are told.

And over time that acid could shred your esophagus. Next time, Nexium, the new purple pill. For many, one prescription Nexium daily means 24-hour heartburn relief; more importantly, it also heals acid-reflux erosions.

Nexium, for those who lived through the early 2000s, was felicitously named as the next Prilosec, the original purple pill by AstraZeneca. Prilosec was going off patent so it would be available generically, and inexpensively by other companies. This meant that AstraZeneca’s top product was to become its fiercest competition — the corporate version of a genius baby turning into a rampaging monster. Nexium was a variant on the Prilosec molecule that could be sold by brand name and using the same brand color.

And healing is such a great feeling.

One of the aims of an ad like this is to reframe the experience of heartburn, heightening the fear of consequences, and associating it to acid-reflux disease so that you can see multiple reasons for getting on a daily treatment. The other aim is to capture all those Prilosec users and bring them over to Nexium.

Other serious stomach conditions may still exist. Talk to your doctor. The most common side-effects of Nexium are headache, diarrhea and abdominal pain.Don’t let acid reflux eat at you! Next time, ask your doctor about Nexium.

The pre-emptory tone is typical of DTC ads, we the consumers are asked to ask our doctors about the drug. This does work, to pre-empt our doctors, and studies show that they do prescribe more then (1.5 to 5 times more!).

I’ve been collecting DTC pharmaceutical ads for about eight years now on and off — television and magazine ads. They are part of the research i’ve been conducting for a book I’m working on, Drugs for Life, on the increasing amount of medications that are part of our lives in the U.S. DTC started in earnest in 1999, so in this blog I’ll be featuring and discussing our decade of ads in order to open up a conversation in Psychology Today about these techniques of persuasion and education, and to think about their effect on our sense of health and illness, risk and treatments.