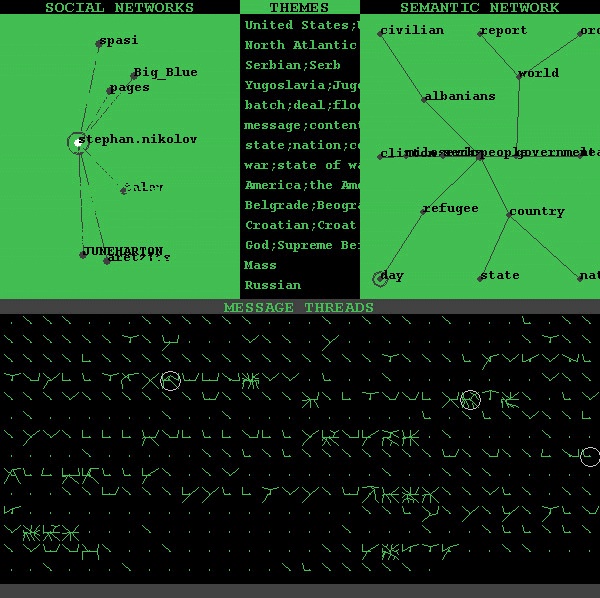 An Interview with Warren Sack

Preface: Recently I was talking with a friend, relating an incident that had happened to me when my word processing program froze, when I realized with a start that I had had the exact same conversation, word for word, with another friend, Warren Sack, the day before. The weird thing was, I could not tell whether I was causing these two friends to say the same things in response to me, or whether they were coaxing the same words out of me. Of course the conversation stopped being the same the moment I froze, and I’ve never been able to repeat the conversation.

What follows is a reconstruction of an interview I conducted with Warren Sack, a software designer and media theorist presently completing a Ph.D. at the MIT Media Laboratory. Sack makes computer-based social technologies that make you stop and think about how much you are invested in automatic ways of conversing. The computer program ELIZA has been doing this since 1966, but as Sack discusses below, programs that ask questions rather than answer them never became a focus of the artificial intelligence community. Sack has therefore located ELIZA’s kin among performance artists, improvisational actors, ethnomethodologists, and Socrates, the great questioner, also known as the great simulator.

Sack has a history of putting philosophy and cultural studies into computer programs. He has a B.A. in Computer Science and Psychology from Yale University and worked there in the Artificial Intelligence Laboratory for three years. With colleagues at Yale he designed and implemented a computational environment – based on a touch- screen and PC – for preschool children to count and to do simple math. He also designed computer-based tutoring programs to teach undergraduate programming. After Yale, he studied philosophy and artificial intelligence for a year at the University of Paris VIII, Vincennes at St. Denis followed by three years in Santa Cruz, California co- organizing a cultural studies of science and technology working group. From 1992 until 1994, at the MIT Media Laboratory, he developed two systems for automatically editing digitized video, and experimented with text-based, automatic story generation and analysis systems. He is a member of the Machine Understanding Group at the MIT Media Laboratory and a member of the Interrogative Design Group at the MIT Center for Advanced Visual Studies.

Lately, he has been working on a computer program to generate questions and function as an “artificial participant” in on-line, electronically-mediated conversations. I decided that this program was the ideal site to interrogate Sack on the possible roles of computer programs and other social technologies for posing to us the problem of the zero level of conversation. As you will see in the dialogue that follows, there are many social zeros that we operate with. The program that Sack is working on is called SimSocrates.