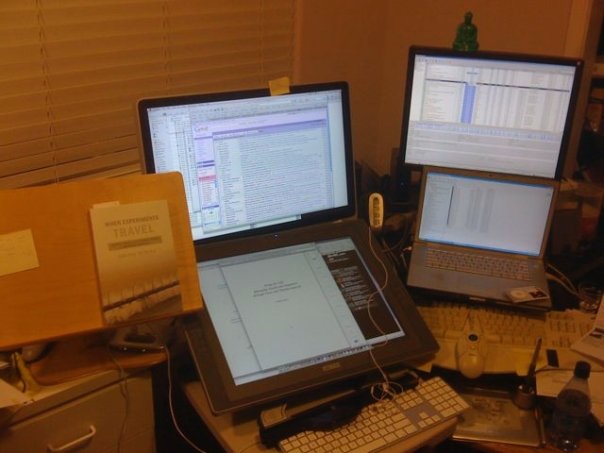 On these ways of reading, Michelle La has made a great spreadsheet approach to this essay, and Michelle Murphy created this version that we used in our class “Another University Is Possible”.

Notes on reading modes sent to a grad class:

Close reading means that I attend to the specifics of the text.  I am interested in how a text as a text makes arguments.  What specific modes of writing, grammars, uses of words, modes of characterizing others, and of characterizing others’ arguments are used.  I bring up the author’s other works as part of a general context of the kinds of problems being addressed but am committed to figuring out how to find these problems within the text, even if this means reading across a number of pages for a small number of passages.  My aim here is to locate the textual basis for making a claim about what the text is doing.  Hence my predilection for comments about the method of the text within the text.  A general reading I would (perhaps unfairly) characterize as one that sees a text as an instance of something that transcends it (the author’s intention, oeuvre, the times, etc., see Foucault’s “What is an author?”).

Constructive means that I aim to locate/generate coherent arguments/stands from the text.  I am interested in finding a line of argument and showing how the argument is supported and elaborated within the text.  This does not mean that I am inattentive to problems, to contradictions, and incoherences, but I have tended to read these as problems with the text, not with the arguments that I locate.  A deconstructive reading, as we discussed today attends specifically to the incoherences and contradictions in the text and attempts to show how they are motivated.   It looks at the ‘structure’ of these arguments with a kind of psychoanalytic/multiple-logic eye.  It emphasizes the arguments of the margins of the text and shows how these are often better than the central arguments, and how the central arguments depend either on the margins or on the specific things they attempt to exclude.  My readings of the cognitive science books (Cognition in the Wild, and Plans & the Structure of Behavior) were deconstructive in that they showed how the apparent arguments of the books were dependent upon a binary-like valuing of reason and rationality that permitted the temporary exclusion of social and emotional issues at the outset so that they could be added later on – but that these issues were in fact the foundation of the enterprises and that this foundation could be seen in various traces throughout the books.

A positive reading to me is one which aims to create new concepts or arguments, or to elaborate on existing ones in order to articulate them with current issues.  As I discussed today, I think a negative reading is one which is addressed to one’s own limitations as a cautionary tale.  A negative reading points out how errors happen and offers means to be aware of them and hopefully avoid them.  As such it is usually about a mode of attention: watch what you are doing.  But it does not offer a different mode of operating.  I think the negative mode is extremely important and worth a lot of effort.  At the same time, for this class, for ‘information’, my interest is in finding new ways of talking about it.  So one task is to locate intriguing existing ways of talking about information and thinking about how they can be extended.  It also means locating in the texts that we have been reading a set of possible metaphors, models, logics, and arguments that might be fruitfully applied to information (even if info is not thematized).

A generous reading is very close for me to a constructive one, but is more general in that it emphasizes the text’s strengths.  I am interested in making the best case for most texts, pulling out their strongest arguments, even if this means constructing them from scattered fragments in the text.  It is important here to make a close reading and to see where the text fails to make the argument and where it makes counter-arguments.  A generous reading thus requires a certain fidelity to the text that a positive reading does not.  The positive reading need only use the text as a site from which a new argument can be launched (Nietzsche: the philosopher shoots the arrow, another picks it up and shoots it somewhere else).  A constructive generous positive reading thus works to find a coherent defensible new argument/concept within the text.  An argument that perhaps goes beyond “the author’s intention” but could be demonstrated to be nascent or latent within it (a solid set of traces).  A critical reading on the other hand, emphasizes the weaknesses of a text, and holds it particularly responsible for inconsistencies, and usually attempts to tie these problems to the value of the text in general (often implying that these problems raise a general question of the legitimacy or truth-value of the text as a whole).  Again, critical readings are very important, worth training on, and wonderful allies in making a case against your enemies.  But I feel that we academics are often so much better trained at critical rather than generous modes of reading that we value those who make them more, think they make more sense, and experience them as so much easier to do than generous ones. I see Derrida’s Grammatology  as deconstructive, mostly negative, but generous. 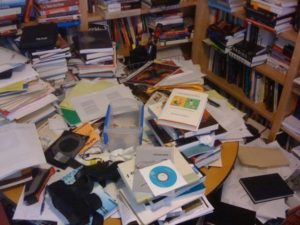 My mostly un-worked-out mode of archaeological reading is a means of constantly locating a text’s arguments, statements, and metaphors within a set of other discourses (see Foucault’s Archaeology of Knowledge, “What is an author?” and then essays on genealogy).  I see a hermeneutic mode as one that works almost completely within the text to unfold a meaning by insight and in Heidegger’s case a kind of etymology.  Or in Gadamer’s, the hermeneutic mod of analysis concerns locating a text within a geo-historical epoch’s “horizon of thought and common sense.”  My sense of an archaeology means that I am interested in how a certain figure of speech, for instance, echoes managerial business lingo at the time of text; how a formulation of rationality shows strong traces of a Shannon+cognitive-science lineage.  I see this as a potential continuum in that the archaeological pays attention to more local and struggling modes of discourse whereas the hermeneutic (say in Derrida) attends to epochal modes (linguistics, hermeneutics, Western philosophy).  An archaeological reading tends to create a web of connections among different texts (New Corporate Activism borrowing its rules and structure from Rules for Radicals, its notion of citizenship from the neoconservative-libertarian-fiscal-Right, and its notion of discourse from rhetoric via PR).

In a methodological reading I attend to the traces in the text of how the text was made, the research that was done to provide the text and the work of the construction of the text (meaning the constructive, generous, positive, archaeological one that I have been identifying).  I ask the question: what could I learn from this text about how to go about my own research?  A more explicative approach might ask what does this text say, and how can I use its conclusions in my own writing?  Or more prosaically: what is the main argument of this text, what are its main supports and weaknesses, and what is potentially worth citing in the future by me?  The explicative approach is important and part of what we must attempt with all texts.  But my feeling reading the secondary literature that abounds about most key texts is that there are many plausible, competing accounts of the meaning of the text (including along the above set of dimensions) and that to engage at this level is a choice that involves one in a responsibility toward that secondary literature.  Also, I feel that this is not my strength for a number of reasons (most of this stuff is in translation from languages I don’t read, most of it is within traditions that I am inadequately trained in, most of the secondary literatures develop internal vocabularies and concerns that lie outside of my own research interests).  A methodological engagement with a text seems to offer me the most valuable way of learning from it (cf. Ranciere’s Ignorant Schoolmaster: one researcher engaging with another).

I am very ambivalent about the notion of an ‘ethical’ right now – but that means that I am drawn to it in spite of my reservations and deep sense of the vagueness of what follows.  I call my mode of reading ethical because I am interested in how the arguments, concepts, and models that I draw out of a text can be read as being deployed against social things that one is opposed to.  A descriptive approach I would characterize as presuming a distinction between an argument and how it might be deployed.  This does not mean that I read arguments as having a necessary politics, far from it, but I do read them as deployed-arguments (within the text, and for my own purposes), they are articulated within a set of discourses and bodies (and abstracting them from these is to create a different argument).  Nor do I think that ethics is necessarily good: I read the book New Corporate Activism ethically in two ways: for how it articulates a coherent ethical position for the corporation (the person of the corporation), and then again for how it offers me a mode of thinking through the weaknesses of corporate tactics (their often dependence on cooperation among competitors for instance).  In 1000 Plateaus terms, I read texts ethically as order-words, as interventions (and not as descriptions, representations, or anything secondary to some primary reality).

So there you have what I hope is a helpful, considered analysis of my own reading practices at this moment.  I would really welcome any comments that come to mind, especially challenges, criticisms, additions, deletions, etc.